Believe it or not, there is more to Swiss food than cheese and chocolate. Just take a look at these top 10 dishes, along with recipes to try at home.

Switzerland may be famous for its beautiful natural scenery, but when it comes to Swiss food, it’s a gourmet paradise. Aside from the country’s world-famous cheese and chocolate, there are numerous national and regional dishes to explore throughout its 26 cantons. Furthermore, many of these incorporate a number of influences from neighboring countries such as France, Germany, and Northern Italy. Needless to say, you won’t go hungry when living or traveling in Switzerland. Just take a look at these top 10 Swiss foods, along with recipes to try at home.

A roundup of iconic Swiss food wouldn’t be complete with mentioning this devilishly delicious dish. Cheese fondue is the ultimate comfort food and ideal for sharing with friends and family. It consists of gooey melted cheese; traditionally a blend of Gruyère, Emmental, and Appenzeller, mixed with other tasty ingredients. These might include garlic, white wine, cornflour, and even kirsch (cherry brandy). Cheese fondue is served at the table in a special ceramic pot called a caquelon. A small burner is placed underneath the pot to keep it at a constant temperature. Small cubes of bread are then speared onto prongs and dipped into the hot cheese; hopefully without dropping off! Bursting with flavor and extremely satisfying to eat, it’s no wonder fondue remains one of Switzerland’s most popular dishes. 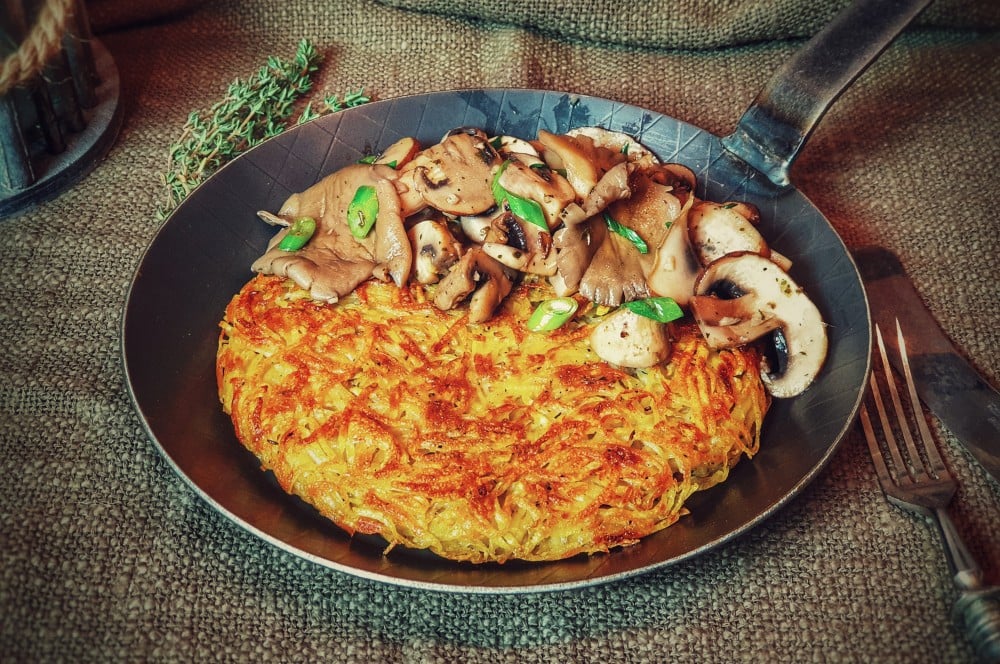 Crisp on the outside and melting on the inside, rösti is another popular Swiss food and was originally eaten as a cheap and simple breakfast by Bern farmers. Nowadays, however, it is enjoyed all over the world and at any time of the day. Rösti is essentially a fried potato-based pancake which is made by frying (or occasionally baking) flat round patties of coarsely grated raw or parboiled seasoned potato in oil. Some recipes call for bacon, onion, cheese, and even apple to be added into the mix. The Swiss consider rösti a national dish and many people enjoy eating it with fried eggs and spinach or fleischkäse; a corned beef, pork, and bacon-based meatloaf. For the ultimate treat, though, you can serve it topped with smoked salmon, sour cream, and chives.

Chances are you have eaten muesli for breakfast at some point in the past. However, you might not have known that it was actually invented by a Swiss doctor called Maximilian Oskar Bircher-Brenner back in 1900. Believing that a diet consisting of cereals, fruits, and vegetables is better than one based heavily on meat, he created birchermüesli for patients in his Zürich sanatorium. This is essentially a mix of rolled oat flakes, fruit, nuts, lemon juice, and condensed milk. The original recipe entailed soaking the raw oats overnight to help them soften. Today, the dish is still a very popular breakfast throughout Switzerland and Germany. However, many people use quick oats to speed up the preparation time in the morning.

Raclette is the name of a semi-hard Swiss cheese that is made from Alpine cows milk and tastes slightly nutty, like Gruyère. However, it is also the name of a popular Swiss dish, of which the meaning comes from the French word racler – ‘to scrape’. This is because traditionally, eating raclette involved holding an entire wheel of cheese in front of a fire and scraping it off onto a plate as it melted. Nowadays, however, slices of cheese are melted in table-top raclette pans or grills and accompanied by other ingredients. These might include small potatoes cooked in their skins, vegetables, cold meats, pickled gherkins, onions, and bread. With a modern raclette grill, you can even melt the cheese on one layer and scrape it over grilled vegetables and meats on another layer.

Also known as Engadiner Nusstorte, this sweet, caramelized nut-filled pastry originates from the canton of Graubünden in eastern Switzerland. It is made in small independent bakeries throughout the canton and many have their own variation on the basic recipe. The shortcrust pastry is made using flour, sugar, eggs, butter, and a pinch of salt. The filling then consists of caramelized sugar, heavy cream or milk, and coarsely chopped walnuts. Some recipes also include a dollop of honey. Many people enjoy this tasty little dessert with a cup of tea or coffee. Interestingly, it is so popular that it accounts for 20 to 40% of the total sales for many bakers in Switzerland and one of their largest export items.

Sometimes called herdsman’s macaroni, Älplermakkaronen ­is a traditional all-in-one dish that originates from the German part of Switzerland. It uses all the ingredients that were available to the herdsmen who were looking after their cows on the mountain pastures of the slopes of the Alps. These include cheese, potatoes, onions, macaroni, milk or cream, and apples. The classic version is made by layering cooked potatoes and macaroni with cream and cheese, before baking it in the oven. People usually serve it with fried onion rings and a stewed apple sauce on top. The dish sometimes comes with bacon, too. Whatever ingredients you include, though, Älplermakkaronen is a seriously hearty meal that warms you up a treat.

This popular Swiss food, which in German translates to ‘sliced meat Zurich style’, has been enjoyed throughout the country since the 1940s when it first appeared in cookbooks. Originating in the Zürich region, the dish is traditionally prepared with strips of veal mixed with cream, beef stock, and white wine. Some contemporary recipes may also call for sliced veal liver and mushrooms, too. Zürcher Geschnetzeltes is typically seasoned with salt, pepper, paprika, and lemon juice. People usually eat it with rösti (see above), noodles, tagliatelle pasta, or rice. And if you don’t fancy veal, you can always substitute it with chicken or pork when making it yourself.

Grown in the Swiss canton of Valais, saffron is an essential ingredient of saffron risotto. This is a traditional dish in Ticino, the southernmost canton of Switzerland, which shares a border with the Italian regions of Piedmont and Lombardy. Interestingly, Ticino is also the one canton in Switzerland where Italian is the official language. The comforting dish is made using risotto rice that is cooked slowly with onions, stock, saffron threads, wine, and cheese. People often serve saffron risotto with a luganighe; a raw Ticinese sausage that contains pork, spices, salt, pepper, and red wine. Depending on your preferences, though, you can add chicken, prawns, veal, or bacon to the recipe.

There are many types of bread in Switzerland, but one of the most popular and delicious is a soft white loaf called zopf. This is easy to recognize as it is a plaited loaf; the word zopf means ‘braid’. The dough is made from white flour, milk, eggs, butter, and yeast, and plaited into a braid. Before baking, the dough is brushed with egg yolk to give it a golden outer crust, much like the Jewish bread challah. Some say that zopf originates from an ancient custom of widows cutting off their braids and burying them with their husbands. While this story is just folklore, it remains a popular tale in Switzerland. Nowadays, people traditionally eat zopf on Sunday mornings and you can find it in bakeries all across Switzerland.

Originating in Switzerland’s capital, Bern, the Berner platte (or ‘Bernese platter’) consists of a wide range of meats and sausages. This might include beef, ham, smoked bacon, smoked beef, pork tongue, spare ribs, pork knuckle, pork loin and shoulder, or marrow bone. This hearty meat feast is usually accompanied by juniper-flavored sauerkraut, potatoes, and dried beans. This popular Swiss food was created on 5 March 1798 after the Bernese defeated the French army at Neuenegg. To celebrate, they held a huge feast where everyone brought along whatever they had to hand; hence the variety and predominance of preserved meats and other foods.

Rates of ambulatory heart failure steady from 2001 to 2016